igh up where Hillsdale blends into Healy Heights as the roads rise toward Council Crest, there’s a natural drama built into every home. Each one hugs the steep hillside and looks down on Marquam Hill, the Willamette River, and the city beyond. A lot of the homes on these winding cliffside roads add a dash of the cinematic, too, calling to mind Endor from The Return of the Jedi or M’Baku’s mountain lair in Black Panther. These movie connections, though, are all about the setting: the trees, the soaring views, the necessary feats of engineering and suspension. Inside, an Ewok or a citizen of Wakanda wouldn’t feel particularly at home.

But the movie lineage of one house on the edge of Marquam Nature Park would be clear no matter where it was. We could plop it in the dullest suburb, make it a Marfa, Texas, art installation, or, most fittingly, perch it atop a treeless knoll in rural Connecticut, and any visitor would know they are in the Beetlejuice house.

Now, it’s not a re-creation of the set or some kind of shrine to the 1988 Tim Burton film. Except for the false wall on the upstairs porch, which had the team reviewing images from the movie, it’s more of a feeling: a little creepy, a little playful, and a lot of personality.

Ray Sepulveda was about 8 years old when he first saw the Tim Burton film that left such an impression on him. In it, a recently deceased couple (Barbara and Adam, played by Geena Davis and Alec Baldwin) are adjusting to the afterlife in their classic Connecticut farmhouse when New York artist Delia (the unforgettable Catherine O’Hara) and her designer friend Otho (Glenn Shadix) begin transforming it with a very different aesthetic. Desperate to get rid of them, the dead couple hire a crude Netherworld bad-boy bio-exorcist named Betelgeuse (Michael Keaton) to help, and antics ensue.

While the new homeowners in Beetlejuice differ on their dreams for the renovation—“If you don’t let me gut out this house and make it my own,” Delia threatens her husband Charles, “I will go insane, and I will take you with me!”—Sepulveda and his husband, Jon Valiente, were very much on the same page. When they met 17 years ago in Florida, their first date was at a Halloween horror house. “I joked that … he wanted to get me scared so I would hold his hand,” remembers Sepulveda.

“Ever since then Halloween was like a thing for us,” Valiente says. His husband adds that it’s “the best time of the year to buy forever home decorations.”

After visiting Portland on their honeymoon, Sepulveda and Valiente—a visual interface designer for Apple and a freelance illustrator/graphic designer, respectively, who were already working from home before the pandemic—decided to level up from their San Jose–area condo and buy a roomier early-’90s box of a house in the hills south of downtown, relishing the trees and moss and moisture of Portland.

“Being from Florida, we like rain,” Sepulveda says. They knew the house needed some work. Besides having their hearts set on the Beetlejuice wall for the upstairs porch, they wanted to bring in more light by taking out the counter-lined wall that left the entryway in shadow and change what had been downstairs kids’ bedrooms into their offices.

“We both were working from home, so we wanted to make sure the house functioned right from the start as a place that we could work full-time,” Sepulveda says. “We loved that we could divide it into sectors.”

They ended up painting the entire stairwell down to the lower level bold yellow, guiding them down to the bright ideas or up to the sunlit living area. Also on the lower level and once open to the hallway, the laundry room is now closed off with a door but includes a tunnel opening for their cat, Mr. Peepers, to reach his litterbox.

They also wanted to update some of the unfortunate ’90s elements, like the tiered-cake ceiling in the dining area. The house was completed in 1993, “so not a particularly stellar era for construction in historical terms,” says architect Colin Jensen, principal/owner at Thesis Studio Architecture, which teamed with general contractor Hammer & Hand on the project.

What no one realized at the start, though, was that there were “some problems with how the house was weatherproofed,” Jensen says.

“There was a lot of damage to the exterior envelope of the house, resulting in a full siding replacement,” says Daryll Fry, project supervisor with Hammer & Hand. “We ended up touching pretty much every surface of the house.”

Jensen says the moisture/dry rot news was like a bomb dropped midconstruction, but the couple took it in stride. “It opened up opportunities for some cool things we weren’t thinking of,” says Sepulveda. All the windows had to be replaced, for example, and some ’90s triangular-shaped windows and glass bricks had to be rethought, resulting in a grand circular picture window above the front door, completely changing the feeling of the upstairs open den, which looks out on the entryway and living room.

“The good thing is that the windows are way bigger than they were,” Valiente says of the advances in the past 30 years in window design and insulation—modern windows give more inches to glass and less to the casing.

Contrasting with the yellow, the stairway up to the bedroom level is black, as is their bedroom wallpaper from New York’s Flavor Paper, patterned in Mylar with glossy knives, razors, scissors, box cutters, and broken bottles. It’s interrupted by a portrait by Sepulveda of two headless figures in red suits, a nod to their Beetlejuice-themed wedding.

“The bedroom was our spot for our dark humor to come in,” says Valiente. It was also a spot for Thesis to design custom cabinetry to fit the curved wall.

They took the pink and gold tile out of the adjacent bathroom, along with what Sepulveda calls “the giant whirlpool nacho-shaped thing” that was all the rage for ’90s bathtubs. A sleeker new Karli tub (from Signature Hardware, but no longer available) leaves more room for Mr. Peepers to enjoy the bathroom’s heated floor.

Steps away from the bedroom is the clearest Beetlejuice element of the house: an open porch with a freestanding “false gable” wall on one end, the floor lined with fake grass that calls to Adam’s miniature town. On dry days, the couple can often be found there with their laptops or Nintendo Switches.

It wasn’t as simple as it looks from a structural engineering point of view to make the freestanding wall safe and code-compliant. “There was lots of scaffolding and craning of steel pieces into place,” says Fry, “definitely a fun and technical challenge.”

“Basically, we were creating a sail,” says Jensen. “There’s a keystone beam that punches through, and that was a direct homage to the movie [but is also] a pretty heavy-duty structural element that connects back to the house and keeps all of that rigid.” The beam is painted with Benjamin Moore’s Yellow Flash, the same color on the lower stairwell and the front door.

The couple gave their design team a DVD of Beetlejuice as a Christmas present. The team, meanwhile, welcomed the new Portlanders with tickets to the always-spooky Lovecraft Film Festival at the Hollywood Theatre.

“I love the Tim Burton stuff, and I hadn’t ever gotten to work on something that was so inspired by a particular theme,” says Fry. He describes the collaboration as Sepulveda and Valiente—“incredible designers working in visual mediums”—bringing ideas that were put in motion by Jensen and the Thesis team and then brought into “tangible reality” with Hammer & Hand. Jensen calls the whole partnership “a perfect fit.”

One of the best afterlife elements wasn’t even intentional, Sepulveda says: the way the wind sounds through the round opening on the false wall. “We didn’t realize the oculus that we made there forms a whistle, and when the wind is at the right angle the house will whistle.” They can even hear it inside, he says. “It’s like a little ghost, wooing.”

Thu Mar 31 , 2022
The two apartment buildings that sold to Lakeland Capital for a combined $6 million are located across from one another on Arthur Ashe Boulevard. (Mike Platania photos) While the local apartment market has been dominated recently by huge nine-figure sales, smaller players are also eager to get in on the […] 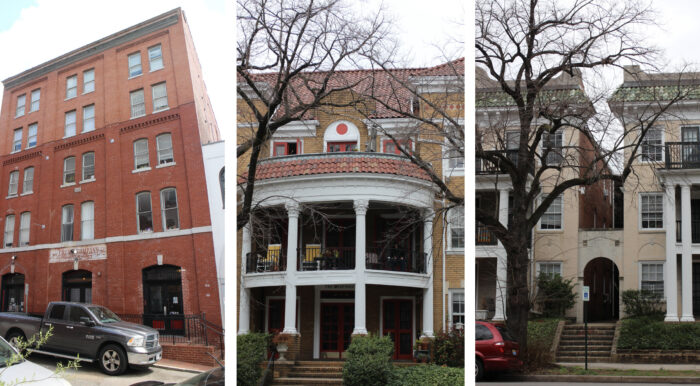