For the first time in two years, the 250-pound solid bronze doors to the most exclusive crypt in town will reopen at Wilhelm’s Portland Memorial Mausoleum.

The century-old Rae Room, holding the marble sarcophagi of a lumber baron and his scandalous second wife, is closed to the public 364 days of the year, opened only on Memorial Day. The past two years, it has remained closed even then because of the pandemic.

This weekend marks the return of Memorial Day festivities to the mausoleum, a “city within a city” that holds some 97,000 souls and is one of the largest mausoleums on the West Coast.

From outside, Wilhelm’s Portland Memorial Mausoleum in the Sellwood neighborhood looks like any other funeral home.

But a modest one-story view from the street hides something extraordinary – a massive, eight-story mausoleum complex built into the side of a hill overlooking Oaks Bottom Wildlife Refuge.

The century-old mausoleum has been expanded over the years into a seemingly endless labyrinth of hallways and staircases. The sprawling complex takes up three city blocks and contains more than seven miles of corridors. Three fountains cascade down several floors. In each stone-lined room, remains are stacked from floor to ceiling, often 14 urns, or seven caskets, high.

Friends and family members are welcome to visit the mausoleum during daily visiting hours. For anyone else, Sarah Lewis, a family service adviser with Wilhelm’s Portland Memorial Mausoleum, offers monthly guided group tours of the facility.

Memorial Day weekend is the only time the entire mausoleum is open to the public.

Visitors come to admire the stained-glass windows, a replica marble statue of Michelangelo’s “La Pieta,” or the Neo-Mediterranean art deco style of the main building. Each addition reflects the style of the times: from early 20th century Tiffany glasswork to hand-carved German woodwork adorning the rooms added in the 1970s.

“It’s like Disney World; it takes more than one day to see it all,” Lewis said.

Lewis’ tours generally last 30-45 minutes and cover just some of the highlights. She starts in the chapel, the first and oldest building on the site.

Wilhelm’s Portland Memorial Mausoleum was originally founded in 1901 as the Portland Cremation Association, featuring a crematorium, a chapel and spaces in the basement to display the urns of loved ones. An ad in The Oregonian for the business’s grand opening promoted cremation rates of $35 for adults and $25 for children.

The interior of the chapel features a stained-glass ceiling completed by Portland’s famed Povey Brothers, whose studio was known as “The Tiffany’s of the Northwest.” (The brothers themselves are also laid to rest in the mausoleum.)

Inside, urns rest inside niches lining the walls, most visible behind locked glass and some hidden away behind marble fronts. Many of these remains have been here for a century, though there is the rare opening when descendants decide to relocate a loved one. Lewis pointed out a recent vacancy inside the chapel’s main room – the first to open in more than 50 years and one of the most expensive places to be laid to rest at the mausoleum. The empty niche, behind antique beveled crystal glass, is large enough to hold several urns.

By 1919, space below the chapel was filling up and construction began on an adjacent mausoleum. News reports at the time said the building would contain 400 marble-lined vaults for full-body burials and “be the only steam-heated mausoleum in America.”

The space turned out to be a popular interment option, and by 1923 the company was already planning the building’s first expansion.

New interments are held every week, Lewis said, and niches are still being added to the building. Visitors are asked to be respectful when visiting.

“A lot of this building looks like a museum, but it’s not a museum,” Lewis said. “It’s a sacred resting place for thousands and thousands of people.”

In addition to the Povey Brothers, the mausoleum is the resting place of several founders of Franz Family Bakeries, members of the Jantzen family, known for their namesake swimwear company, and movie star Mayo Methot, most famous for her volatile marriage to Humphrey Bogart. (He was said to have sent flowers to her crypt weekly until his death.)

Members of the Yeon family lie on either side of a stained glassed window depicting a rainbow over Multnomah Falls. John B. Yeon, for whom the state park near the falls is named, was one of the principal architects of the Historic Columbia River Highway.

The biggest Memorial Day draw is the 15×15 foot Rae Room, the eternal resting place for George and Elizabeth Rae.

George, who died in 1918, was the vice president of the Inman-Poulsen Lumber Company. Elizabeth was first his housemaid and then his second wife. When George died, his adopted daughter and son-in-law fought Elizabeth over the estate, contending she had blackmailed George into a sham marriage.

But Elizabeth prevailed in court, and she used her money to build a grand monument for her and her late husband, with solid marble walls and an intricate carved wooden ceiling.

The much younger Elizabeth died in 1942 and was placed next to her husband in a matching solid bronze coffin and marble sarcophagus. Above them, a nature scene is depicted in stained glass with the words at the bottom reading, “The end of a perfect day.”

“It’s such an intriguing story and such a beautiful space,” Lewis said. “If you took money and built a space like this nowadays, it would be a couple million dollars.”

Most of the private crypt rooms in the mausoleum are closed to the public and open only to family, but the Rae descendants allow this special room to be opened once a year.

“We are grateful to show off the beauty of the room,” Lewis said. “Otherwise, it would just be a hidden secret.”

If you go: Wilhelm’s Portland Memorial Mausoleum is at 6705 SE 14th Ave. Public visiting hours for Memorial Day weekend are 10 a.m.-4 p.m. Saturday and Sunday and 9 a.m.-4 p.m. Monday. The Rae Room will be open only on Memorial Day. 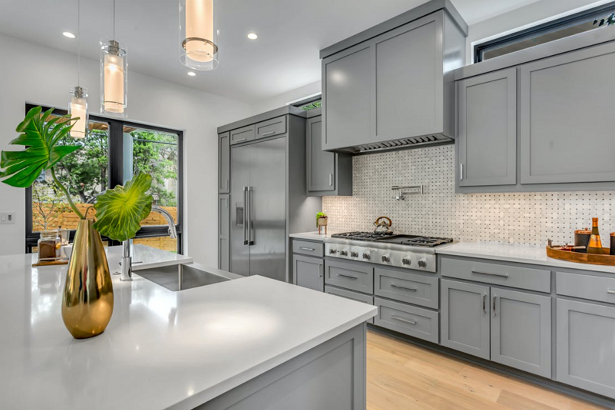